In most countries, dogs are regarded as pets and are taken care like family wherein they sometimes even sleep in the same beds as the owner. In Japan, they even have a monument for Hachiko, a dog who is remembered for his remarkable loyalty and fidelity to its owner. However, in some parts of China, dogs are slaughtered and eaten in what they call as the Yulin Dog Meat Festival. 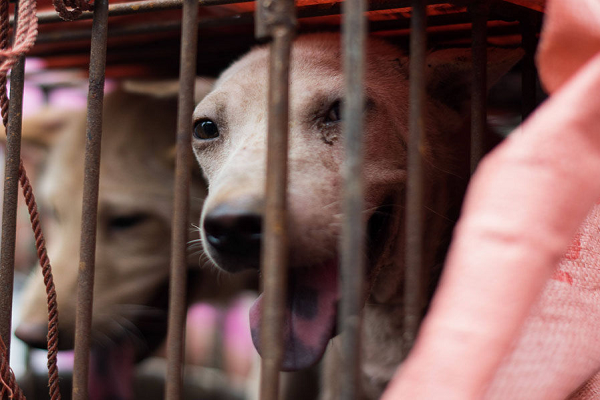 The Yulin Dog Meat Festival is an annual celebration held in Guangxi, China. It started back in 2009. During each festival, they kill approximately 10,000 to 15,000 dogs and the festival goes eat the dog meat. It lasts for almost 10 days and happens every end of June which is dubbed to be the summer solstice. Though it just recently started again almost 8 years back, the history of this tradition dates back around 400 years ago. Chinese used to believe that eating dog meat would help ward off the heat that was felt during the summer months.

A lot of campaigns have been raised regarding animal welfare for dog meat eating both locally and internationally. Residents and festival organizers, however, say that dog meat eating is no different from eating pork (pig meat) or beef (cow meat). They are also meat taken from live animals. Animal rights activists claim that the dogs are treated dreadfully and killed abominably. Some dogs are even stolen from their owners as seen in some pictures where dogs lined up to be slaughtered are wearing collars.

A lot of movements have been made in petitioning that this festival is shut down completely. The first step to this is banning dog meat selling the week before the actual festival happens. All violators will face fines of up to 100-thousand RMB which are around $14,500 or can be given possible time in prison. Although the duration of the rule being effective is not quite alarming to dog meat sellers, it already gives a note that the government is doing something about it already.

Researchers say that it is quite impossible to remove this tradition completely. Though many countries and even famous people such Ricky Gervais and Gisele Bündchen have help to campaign against this activity, a lot more other places such and Taiwan and the Philippines do this as well. Though not widely known, since they don’t kill thousands and they don’t celebrate it like a festival, it is happening discretely. However, compared to the actions done by China, they are still very far from the target of eliminating it completely. The Philippines has already released a plan of eliminating dog meat trade in their country due to the raised issues of animal welfare but most especially rabies concerns. Taiwan, on the other hand, has recently amended in the animal cruelty laws and added a clause making it illegal to eat dog and cat meat. Surprisingly, this law made in Taiwan is the first in Asian countries.

In 2017, both local activists and international animal welfare groups have signed petitions to cancel the festival totally. Media has been a very effective tool to raise awareness of the issue of dog meat trading in Yulin. Since 2013, the campaign through social media has been heard, although not eliminated, at the least minimized. The number of dogs slaughtered has decreased slowly for having almost 15,000 dogs killed to 1,000 recorded in the recent times. It is not only dogs that are affected by this activity. Eating dog meat can also cause death to humans especially if infected by rabies. China has been reported to have the second highest number of death for the past ten years. Continuous activities such as this won’t limit the chances of having an event such as a Nanking Massacre again. Not only dogs are killed, but also human lives are endangered.

The Wonders of Dog Training

Dogs are considered man’s best friend, and for good reason. They are loyal, full of unconditional love, and can make their owners laugh each...
Read more
Pet

What Sort of Dog Should You Get for Your Family?

Inevitably, many families decide that they want to get a dog as a pet. Whether this decision is driven by the incessant moans of...
Read more
Pet

The Importance of a Safe and Clean Calving Environment

Building a clean calving environment is important as it protects the investment of a farm that has a herd of cows and is looking...
Read more
By Cruz Lena
July 27, 2017
264
Facebook
Twitter
Pinterest
WhatsApp

Proofreading is the bane of many a writer’s job. Sure, when you’ve finished your literary masterpiece, you will be itching to get it to...
Read more

Among the most negatively affected sections of the U.S. population and in other countries are the renters and homeowners with outstanding mortgages and rents...
Read more

There are many rules suggested by expert stock traders. We start with the most important general rule for investing in NIFTY and other types...
Read more

The Growing Demand In RPA Consulting And Features

Robotic Process Automation is the accelerator that each organization would dream of in their digital transformation journey. However, most of the time, they'll find...
Read more

Cruz Lena - April 1, 2021 0
Proofreading is the bane of many a writer’s job. Sure, when you’ve finished your literary masterpiece, you will be itching to get it to...

The Growing Demand In RPA Consulting And Features

List of Popular B.Tech in Automobile Engineering Colleges in Bangalore